Hello, again! I said I would devote an entire post to my presentation at the PronSIG event in Chester (see full report here) , and I had not yet done it because I'm currently drowning in deadlines, and on the other hand, as this presentation was part of an article I've been writing, I did not yet want to give it all away. I have used my own data to show the phenomena in question in the presentation, and I cannot distribute those videos or snapshots because of ethical reasons (though I have permission to show them in presentations with an anonymising filter, which I did), which is another reason I won't be posting my slides publicly, though I'll add a few captures. 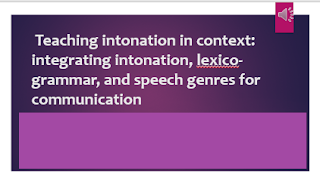 This time I cannot make any disclaimers regarding the representation of other people's presentations, as I'm summarising my own, but there area few points I would need to make: 1) even though this is my own work, I don't claim that my points here are"innovative", or "unique", because I'm sure there must be a lot of people around researching this.  2) And yes, this is about intonation teaching, the theoretical background we develop, how much it responds to real-life interaction, and how we can teach English intonation for interaction, and it is based on L1 English (someone might then want to record conversations using E as a LF and do something similar across different L2/FL Englishes)

3) Another remark I always make at the beginning of my presentation is that, at least in Argentina, to the best of my knowledge, the best work on English intonation and speech genres from a SFL perspective has been (and still is) carried out at Universidad Nacional de La Pampa, in a project including researchers and EFL teachers Lucía Rivas, Miriam Germani, and the rest of the team (sorry I cannot name you all). I have collaborated briefly as part of the project, and I'm very grateful to have worked with them, as it's always great to exchange ideas with a group of like-minded academics who want to see intonation teaching theory evolve.

4) And my final disclaimer: because my PhD research is based on language in social interaction, and I listen to everyday conversation all day long, there is a lot I get to notice about "language in the wild" that I cannot do justice to when I make a presentation for ELT. My selection of points to make in this presentation responds to the need that English language teachers have to be presented with theory on intonation that can inform their teaching. Some of us might want to go further and pursue an MA or a PhD because we want to engage in linguistic research, but many teachers will not, and should not be in a position to want to. So if any of my readers is a discourse or conversation analyst, yes, they will surely gasp in horror when they see some of my simplifications, but I am very respectful of the teachers I have trained and train, and because I am a teacher myself, I know we need something to hold on to, even if it is a "half truth". So this is me using my researcher role informing my teacher trainer role to show other language teachers how research in language in the "real" world can help them develop theory for intonation that can empower students across different speech repertoires, and not theory based in introspection or decontextualised examples.

5) And yes, I wrote this in one sitting while I was having my Sunday breakfast because my blog is of secondary importance at the moment (Sorry! Forgive the typos, etc etc)

I use Systemic Functional Linguistics to inform my view on genre, and as we know, different generic manifestations may have different configurations, which illustrate and also construct different social purposes. Even though texts may exhibit different levels of genre hybridity and blending, there are features that make generic types recognisable, even at a glance. 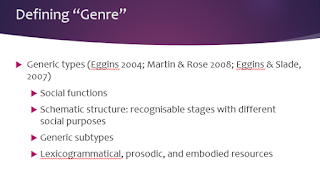 So I asked the audience to take a quick look at four written texts, and identify what generic types they would associate those to. They did so quickly and successfully, even without having read the text. That already says a lot about the features that as members of a culture we associate social purposes to.

I then did something I once did in my Discourse Analysis and Phonetics II lessons: I played some snippets of spoken genres, in a distorted form, and asked the audience to identify them. That was harder, especially because of the audio distortion, but the audience guessed quite well. So then, beyond the lexico-grammar, there are features that make spoken text types recognisable as members of a group, as Tench (1996) illustrates:

The next step is to problematise the role of written vs spoken as a dichotomy... 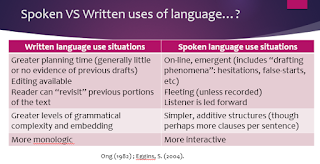 ...and to see these uses of language as part of a continuum, with texts illustrating greater levels of "spokenness" and "writtenness" (Eggins 2004; Mortoro, 2012 > class notes, Flowerdew & Miller, 2005). We can see spokenness and writtenness, and monologism as dialogism as extremes in a cline, and the organisation of different speech genres (and yes, I know that there are many other ways in which we could organise those types in the continuum, this is just one approximation) dependent on a number of features including levels of pre-planning, use of formulaic expressions, possibilities for readjustment, contingencies, and whether the goals and trajectories are clear from the start or not:

The truth is that in many ELT lessons, when we say we "do speaking", we are probably working on the monologic, more written-like types of text and even when we "do conversation", we are mostly teaching lexico-grammatical formulas that contextualise more monologic types of texts (let's be honest: how many times in ordinary interaction do we preface our talk with "In my opinion/view..." or "Firstly...Secondly...". In my 8 hours of conversational data....zero!).

Some lit-review and data-based findings

So the core of my presentation was the comparison of two bigger groups of "genres": narrative, and expository (which, as we all know, are made of a number of "sub-genres", each differing in their possible stages and lexicogrammatical configurations...see Eggins & Slade, 2007).  I presented snippets of more monologic types of stories (as in the introduction to a TED talk), and conversational stories (from my own data), and did the same with more expository texts (more difficult to trace in ordinary interaction). I presented a few generalisations as to possible differences we may encounter in terms of narrative and then expository texts (there is a whole body of literature on this, and yes, I went all simplistic because of the purposes of the presentation,  heading towards practical advice for teaching....before any conversationalist starts rolling their eyes!), putting together my knowledge of Discourse Analysis and Conversation Analysis: 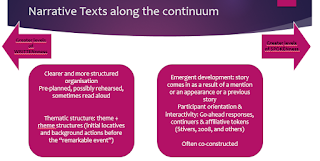 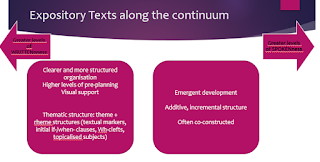 My idea was to show how bundles of features may differ in more written- and more spoken-like texts, and how we can teach them for monologue, and for interaction, in particular, how we can teach our EFL learners to be co-interactants, and not, monologists. 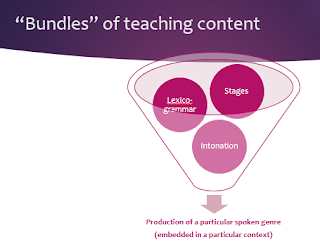 I discussed, based on data, a few generalisations that we can make in the light of David Brazil's account of intonation sequences and combinations, with rising tones (the "loop" symbol) accompanying contextualising, background information, and falls moving discourse forward (the "play" symbol). These patterns are more common in the Orientation and Complication stages of narratives (later stages are generally made of greater "play" sequences), and they were found in both monologic, and conversational stories.

In general, the Orientation stage was found to be "neater" and more clearly patterned in monological stories, versus conversational stories, where the background actions and the contextualisation in the Orientation stage left slots for listeners to produce their "go-ahead" response upon their opening, and then continuers and markers of affiliation (Stivers, 2008, and others), not to mention how recipient activity may "derail" the story, leading tellers to find a moment to make their way back into the story. 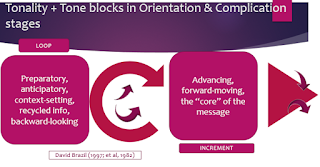 I also discussed the role of acccentuation/tonicity: Event sentences (Gussenhoven, 1984) are often used to make the surprise or contingent nature of the "remarkable event" of the Complication stage explicit (I have also found passive and causative sentences to be doing that in my conversational data).

I made some generalisations as to how we can teach intonation for interaction, and to show how level tones (the "pause" icon) and pauses can also be used by our students to engage their recipients in conversation, and create opportunities for realistic interaction, which will always put students in a position to have to re-adjust, and co-create, instead of thinking of speaking as the clash of two independent, non-related, interactional projects by two separate people (as many of the interactions we hear among students in international exams seem to be!). Tonality blocks of background or foreground information with suitable tones, and the use of pitch height, can also inform the recipients of what their legitimate spots for response incoming could be, and what type of sympathetic/agreeing/etc response can be expected from them (Again, CA/IL people, if you are reading this, just cover your eyes for the slide that follows!): 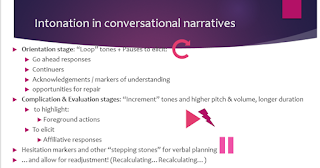 In the same way, I examined patterns and configurations in expository texts in both "monologic" and conversational data.

I then moved on to present ideas to create opportunities for students to use intonation patterns for both more "monologic" and more "dialogic" types of texts:

I know this write-up may look confusing and it can hardly give you access to what I demonstrated in my presentation, as I'm not including the data snippets that illustrate all this here. I also know that many of the things I said were not clear enough for all the members of the audience, as I am aware my enthusiasm often leads me to be overgenerous and overwhelming, and people get drowned in my enthusiastic rant, and I end up saying more that people can process in a limited amount of time (one of the things it's high time I learned to overcome!). But at least I wanted to show you a preview of how my current research on prosody in interaction may, at some point, find its way back into language teaching. I wanted to also once again uphold what my research keeps confirming:  intonation choices are co-built in interaction, and they reveal, and simultaneously, co-construct, context and social action. And all theorising on it, in my very humble view, should bear that into consideration. 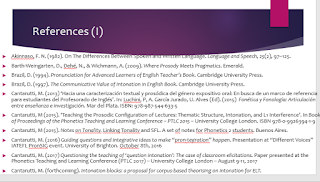 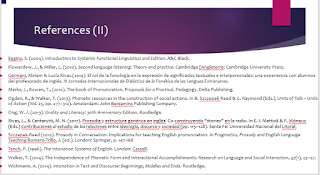 I would like once again to thank PronSIG, and Mark Hancock, for inviting me to share all this with the audience at the "Pronunciation: The Missing Link" event. I would also like to say thanks to Dr. Ogden and Dr. Szczepek-Reed for their advice during my brainstorming period for this presentation, which I think ended up being something different from what I originally envisioned. And of course, a massive thank you to the Department of Language & Linguistic Science for supporting my research in every way.

Thank you for following this blog!
Your comment is welcome. Please add your name and location to your remarks.
Comments are moderated in order to avoid spam and trolls, so please note that your comments may not show straightaway.
Thanks!