This week I got my PhD confirmation (that is, I passed my first year, which means that I am now a confirmed PhD candidate at York, yay!), and I rewarded myself with a short trip to Manchester, to see the Manchester Voices exhibition (because my love for accents still is alive and kicking!). I will be reporting on what I have seen, very briefly, and informally. (And as usual, any misunderstanding or error is entirely my own!)

This exhibition stems from the Manchester Voices research project on "the accents, dialects and people of Greater Manchester" (see webpage link above), and it has been developed by Dr. Rob Drummond and Dr. Erin Carrie, from Manchester Metropolitan Uni.

The exhibition can be found in the very centre of the Manchester Central Library, and it consists of a huge panel that has as its major division the different boroughs of Greater Manchester: Bury, Bolton, Manchester,  Oldham, Wigan, Tratford, Tameside, Stockport, Rochdale, and Salford.  The exhibition is based on a collection of views in the form of video interviews, whose snippets you can access by scanning the QR codes in the poster with your phone.

Note: The current division and unification of Greater Manchester as it is is quite recent (1974, if I understood correctly), and this historical division that included parts of Cheshire, and Lancashire, for example, still sports a great deal of dialectal, and accent variation, as the exhibition fantastically attests.

Tip! If you make it to the exhibition, make sure you have your headphones ready, a QR reading app, and enough battery life (the library's got you covered with the Wifi). I must have stayed there reading the poster and watching snippets for at least a full hour, if not longer!

(Forgive the quality of the pics!) 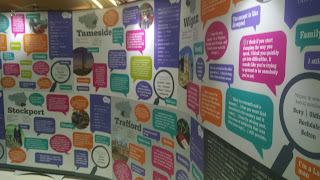 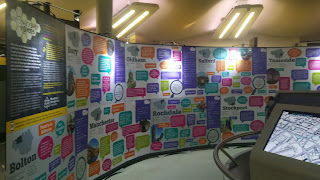 I understand that the interviews were collected through a direct recruitment method. In late August and early September 2016, participants were invited to get into a van parked in central areas in each borough, and they were asked questions by a computer. Some of the questions are related to how they see their own accent and dialect, how representative they believe their dialect is of where they are from, and of what they are and do. Other questions invited them to offer expressions or pronunciations they considered typically local. (I do not have access to all the questions, but the video snippets available featured some of them.)

Maps and speech bubbles illustrate several of the contributions by the participants recorded for the project, and for each borough you have a purple box that summarises some of the pronunciations and lexical items that have been reported to be used in the area.

All in all, the exhibition illustrates different individual viewpoints as to how locals view their membership to Greater Manchester, and how they see their own accent, and others, as markers of their local identity. Some participants reported their own identification with their own local borough as strongly related (or not) to Mancunian identity, others confessed to a closer association to Lancashire (in the western areas), or even Yorkshire (in the eastern areas). It was great to see non-linguists reflect on their own "repertoire of accents" and while talking about their accents, to notice how they also made adjustments to what they were saying, and how they were saying it. I personally got the feeling that some participants were going far "broader" than they would normally go in their everyday life, but that's just an unjustfied claim of mine in the shape of a "hunch".

I found this exhibition really insightful, and as as a former EFL teacher trainer who once tried to help my trainees understand the social and political role of accents in the UK, I honestly enjoyed the fact that I got to see lots of invaluable testimonials as to how accent issues are always latent in everyday life (even for non-linguists!), and how accent is, indeed, a great part of the way people "categorise" each other, and even themselves, in different speech situations.